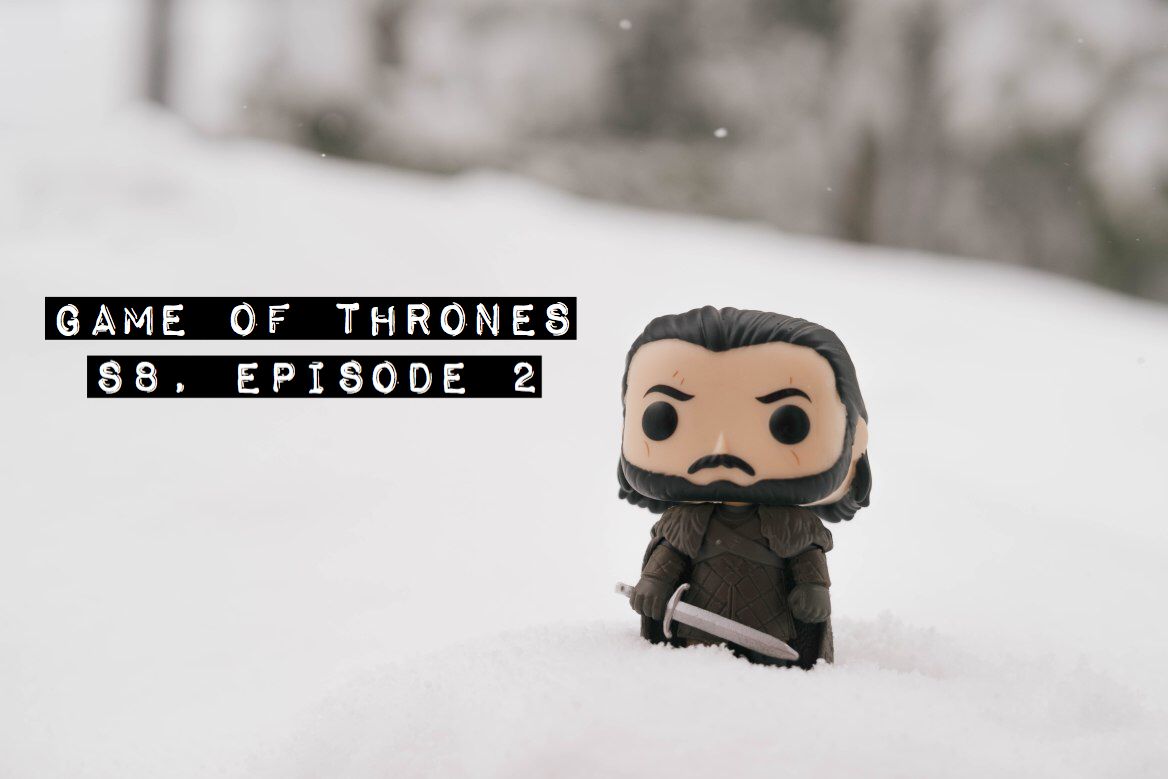 The second episode of Game of Thrones season 8 premiered last week!  I wasn’t able to update this sooner, but better late than never! The third episode is premiering tonight, so I just want to write a few things about last week’s episode before the new one starts.

Did you feel the tension or chemistry in that first scene with Gendry & Arya?

Me: YESSS!!! I was literally screaming. I love the chemistry they had in that scene together as Gendry was making dragonglass. I also thought it was hilarious that he kind of had his shirt open & there was smoke coming up from behind him as Arya entered. I also thought it was hilarious the way she was checking him out & how he looked so amazed by her skill after she threw the daggers. I love all of it.

What do you think Bran meant by “How do you know there is an afterwards?”

Me: I’m actually not sure. I don’t actually think everyone in the entire Game of Thrones universe will die. Maybe he meant there won’t be an afterwards for Jaime or an afterwards for himself because either or both of them will die?

How do you feel about Jaime after this episode?

I’ve always had a soft spot for Jaime & that soft spot for him progressed greatly through the seasons. He’s much smarter than anyone gives him credit for & I know deep down he has a good heart. There’s a line in this episode that Tyrion says to Jaime [about Cersei], “She never fooled you. You always knew exactly what she was & yet, you loved her anyway.” & I feel like that’s some sort of testament about how big of a heart he has for someone who has done great damage through the seasons. Granted, Jaime isn’t perfect & I guess that’s what makes me love his character so much because he’s so, so, so complex. I think that’s what makes good character development & good storytelling when you find yourself questioning whether to root for this guy or not because you want to, but you’re not sure if you should.

Daenerys & Sansa finally get a moment alone together. Do you think they will ever truly find some common ground?

Me: I think them finally having that moment is a start, but they do have different views on what they want. All I know is that Jon is going to be torn between the two because of his lineage, the family, & the love of his life. Sansa & Daenerys needs to find some kind of compromise here because there isn’t much time left. They also have to look at the bigger picture of not just who will end up on the Iron Throne & who has Winterfell, etc. The dead are coming. I would focus on that right now. lol.

Did you tear up when Theon showed up in Winterfell?

Me: I didn’t tear up. I knew he was going to fight alongside them. I also think he’s going to die next episode. lol.

Did you enjoy all of the Tormund & Brienne scenes?

Me: Yes, I thought it was funny because it kind of gives something to the fans who enjoy how enamored Tormund is with her. Do I actually think anything will happen between them? No, but seeing their exchanges between each other was great.

Is Grey Worm dying next episode? What will happen to Missandei if he does?

Oh, Greyworm is for sure dying. It makes me sad to think that Greyworm & Missandei will never get that chance to be back on the beaches again like she wanted & enjoy the rest of their lives together.

Did you cry or tear up when Jaime made Brienne a knight?

Me: I teared up! Their relationship with each other is really special. It was only right that Jaime was the one to make her a knight. I enjoyed that scene Davos, Tyrion, Brienne, Jaime, Tormund, & Podrick all had together. Mallory Rubin from The Ringer described how beautiful that scene was in the Binge Mode podcast here.

Did you love or hate that intimate scene between Gendry & Arya?

Me: There are fans who have mixed feelings about it, but I love it. I think it was important to include it because it highlights how much Arya & the actress Maisie have grown over the years. It doesn’t seem that long ago, but it is. Arya isn’t this little girl anymore that we once saw back in Season 1. She just gets to be a teenager for a day & I think it was important that they showed that & how much she has grown since the Season 1.

Will Jon’s lineage cause a rift between him & Daenerys?

Me: Oh, for sure. She seemed upset about it when he told her because he has heir to the Iron Throne. Her whole goal the entire series was to get to that point & now the love of her life has power over her. I can tell she doesn’t like that.

What Will Happen Next Episode?

Me: Some of my faves will be dying. The Night King will enter through the crypt. That’s it. I’m not emotionally ready for this y’all.