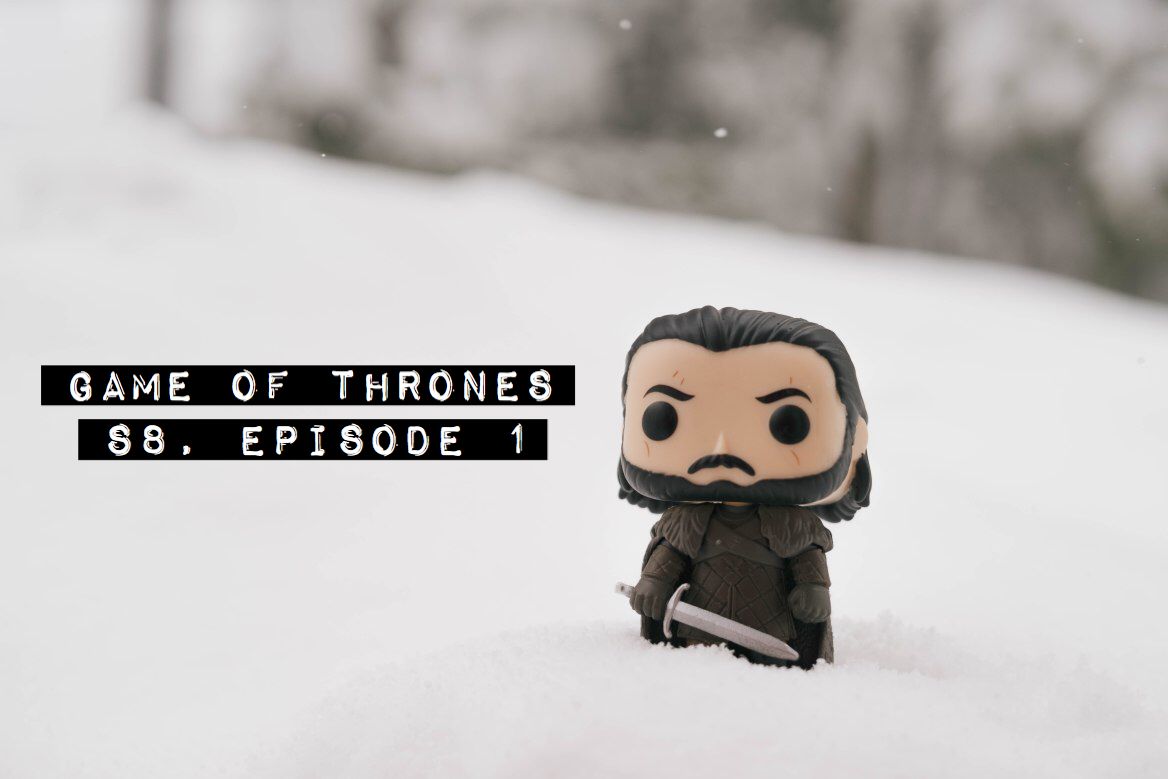 The first episode of Game of Thrones season 8 premiered this week!  Awhile ago, I discussed in this post what Jeremiah & I think will happen this season, as well as the trailer.

If you haven’t watched the first episode & don’t want to be spoiled, don’t read past this!

Pretty much all the footage from the trailer happened in the first episode! I’m assuming they really did not want to show us anything past episode 3.

Jeremiah & I discussed things that have now happened & things we now changed our minds about after watching the first episode:

Do you have any theories of who will end up on the throne?

Me: I initially thought it would be Jon, but now I’m thinking there won’t be a throne to sit on in the end? I’m thinking now both Jon & Daenerys is going to die? If the Azor Ahai legend & Prince that was Promised prophecy are still in play, maybe Daenerys kills Jon at his request as a sacrifice or something & Daenerys dies in childbirth (like Jon did). & the child they have together ends up being “Lightbringer”. I don’t know! This series has so many ways of shocking me & I could be wrong about the whole thing, but it’s always fun thinking about what could happen.

Who do you think will die?

Me: My list is basically the same. Cersei, Jorah, Beric, Greyworm.

Brienne by sacrificing herself to save Jaime or something & after her death, he will take back the sword he gave her a while ago that has valyrian steel so he can use it to kill White Walkers.

I still think Jaime is going to kill Cersei, BUT the reason why I think he will has changed. I think Bronn kills Tyrion with the crossbow that Tyrion used to kill Tywin. Jaime finds out Bronn killed Tyrion on Cersei’s orders, & he ends up killing her because of that. It just sounds extremely poetic to have something happen between the three of them. So yes, I think Tyrion will die, which I had never thought of before this first episode. Once I saw Bronn with the crossbow & other media websites discussing that, it kind of makes sense?

If any of the Stark children were to die, last time I said Bran or Arya, but I’m really not sure at this point.

As I’ve said before, Tormund will probably die too.

Which character(s) would you be emotional about if he/she died?

Me: Jorah, Brienne, Tormund, Arya, & Tyrion. I’m going to be really, really sad if Tyrion dies because I really wasn’t expecting him to.

Love or hate the new intro?

Me: I love the new change for the last season. They’re showing interior spaces now which got me thinking that they did that for a very good reason. The crypts…something is going to happen in those crypts.

Which reunion were you most happy about?

Me: Arya & Jon. Arya, Gendry, & the Hound. I just love the sibling dynamic between Jon & Arya. Arya never treated Jon differently as a sibling & they also hadn’t seen each other in so long, so it was nice to see them finally reunite. I also like the reunion between Arya, Gendry, & the Hound at the same time. Would I have liked it better if they were done separately? Sure. But I didn’t hate how this reunion was done.

Also, Sansa & Tyrion. I don’t really care about their reunion, but I did like the dialogue between them. When she told Tyrion that she used to think he was the most cleverest man alive, phewww 😦  I don’t see her as a power player, but I think she’s much smarter than we all think.

Jeremiah: For me, it was the Jon & Arya reunion. It was the perfect amount of nostalgia, but it also showed potential conflict between the two. When Arya said “don’t forget that” to Jon 👀, it seemed ominous.

Thoughts on Sansa & Daenerys in this first episode?

Me: I feel like plenty of people underestimate Sansa? As I’ve said above, I don’t actually see her as a power player, but I know there’s got to be something impactful she’s going to do that no one is going to expect. I’m not sure how that will play into the relationship between Sansa & Daenerys, but pheewwww, they do not like each other. haha.

Jeremiah: I feel like the conflict between Sansa & Daenarys is much more believable than the one between Sansa & Arya last season. I’m interested in how everything gets worked out.

Let’s talk about Cersei & Euron. Is Cersei pregnant? Will Euron turn on her or vice versa?

Me: I kind of don’t want to talk about them 😂 I’m not sure if Cersei is pregnant. She’s drinking wine? I don’t know!

Jeremiah: I’m pretty sure she’s preggo. I could see Euron trying to turn on her, but it’ll end up backfiring. He’s overconfident. Characters like that usually get killed in GoT.

So it looks like Cersei is ordering Bronn to kill Jaime & Tyrion. Do you think he will do it? Thoughts?

Me: As I’ve mentioned above, I think Bronn will kill Tyrion & Jaime will find out it was Cersei who ordered him to kill them.

Jeremiah: I don’t want to think about it 😣

Me: Finally! It was cool to see & I think they were trying to show his connection or relationship to the dragons too. I feel like they could’ve cut out that part where Jon & Daenerys kiss in the mountains. It was a little unnecessary & corny in my opinion.

What do you think Arya wanted Gendry to make?

Me: I’m not sure. Maybe a modification to one of the swords she already owns? She’s already packing heat. I don’t know how much more she needs 😂

Jeremiah: I think it’s some sort of staff. Maybe one with a dragonglass blade? In the trailer, she’s shown using a staff-like weapon against the white walkers.

Jon finally knows of his identity. Any thoughts on that scene?

As other fans have said, I am glad that it was Sam who told him. They’re really close friends & it also shows Sam had an important role in all of this to have this kind of information. I do think there must be a reason he was told of his identity in, yet again, the crypts.

What Will Happen Next Episode?

I can’t wait for next week! Here’s the trailer for the second episode as well as discussing each scene from the trailer.

Jaime is in front of the Starks, Daenerys, & Tyrion. What do you think will happen here?

Me: Seems like he just wants to tell them he’s going to fight with them, but of course, Daenerys is skeptical because he killed her dad. But Tyrion & Brienne are both there to vouch for him.

Jeremiah: Yeah, Jamie probably just tries to make his case that they should trust him. Bran will probably help the most. If the guy he crippled can forgive him, then the others probably can too.

Looks like Sansa & Daenerys is discussing trusting Cersei. Why do you think this exchange happens?

Me: Maybe she sends a letter saying she’s not going to help fight? I’m not sure.

Jeremiah: Pretty sure Jamie explains that Cersei isn’t coming. He probably tells them about her hiring the Golden Company too. Sansa probably has a smartass comment about how the others should have never trusted Cersei.

Daenerys is in the crypts & Jon looks concerned or distraught? Maybe even upset? What’s happening here?

Me: Seems like he’s going to tell her they’re related. LOL.

Arya looks to be holding a bow? Could that be the weapon she asked Gendry to make for her?

Looks like they’re starting to gear up for the Battle of Winterfell!

Me: I don’t think they will show the battle yet. If they do, they will only show the beginning of it.